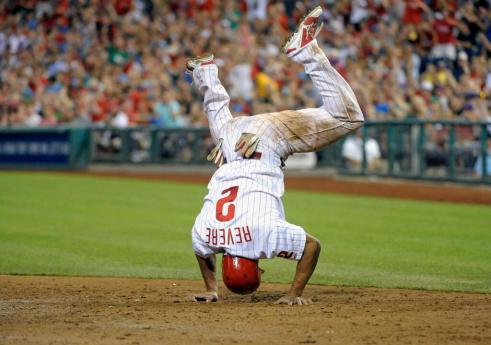 SHUT THE HELL UP ALREADY!

Ben Revere is a ball player. I said it when he got here and I will continue to say it. If the kid was on a decent team with better hitters around him he would be penciled in as an 8 hole hitter. If there is an MLB team out there that wouldn’t take Revere playing centerfield and batting 8th they’re delusional.

If we take a look at Revere’s totals from this 2014 season we will see the same numbers if not better..

All of us can agree that Ben Revere could walk more, but if he can reach base by shooting a ball back through the middle what’s the difference?

Plus, according to Baseball-Reference.com, Revere only strikes out every 11.6 at-bats which is best in the majors. He puts the ball in play which is vital as a lead-off hitter, yet more so as an 8th hole hitter to turn the line-up over.

As of now, Revere stands near the top in four major statistical categories: 13th in average, 17th in hits, tied for 9th in triples, and  4th in stolen bases. 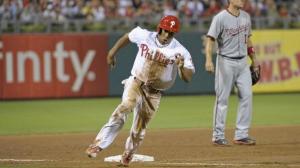 Ben Revere is a talented baseball player and is good at what he does. His job is to get on base and make things happen. It is up to the players behind him to move him over, and bring him in. Ben Revere can only score as many runs as the players behind him in the lineup allow him too. The inconsistency on this Phillies team is troublesome, not just for Revere, but for every player who has a decent day at the yard.

If Revere was inserted into a line-up like San Francisco’s, St. Louis’, Milwaukee’s, Washington’s, etc. He would bat 8th and look pretty damn good doing it.

He would bat 8th with an average over .300 and the opportunity to steal 40+ bases a year.

If the Phillies decide to get moving in the right direction and add some talent to their roster, Ben Revere is a player who should stay right where he’s at. Whether or not Revere stays in the lead-off spot is up to the talent the team decides to add.

The only thing Revere can control is his own play. Appreciate the way he plays, don’t knock him because he’s not what the average fan wants him to be.