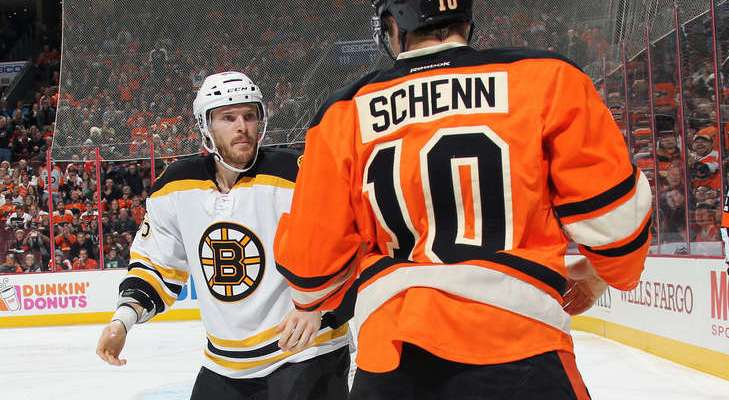 Winning for the 11th time at home this season, the Philadelphia Flyers edge the Boston Bruins Wednesday evening by a score of 3-2 at the Wells Fargo Center on the strength of Mark Streit’s game winner. A gutsy performance from Philadelphia as several players contributed to the comeback. Similarly to the game against the New York Islanders over the weekend, the Flyers had good jump from the on-set. Philadelphia has now won four straight games and is just two points out of a playoff spot with half a season to go.

The Flyers received goals from Jake Voracek (5th), Wayne Simmonds (11th) and Mark Streit (4th). In recent games, we have discussed how well the Flyers’ second line has played but tonight it was all about the top line as they accounted for all of the offense. Despite the move to left wing, Voracek has seemed to rekindle chemistry with Giroux as both players put this team on their backs tonight.

Winning goaltender Steve Mason was again sharp throughout the contest, making 30 saves on 32 shots. Mason now has 10 wins on the season and is boasting a .916 save percentage. Here are your game notes:

At an early stage in the game, Brayden Schenn set the tone with a monster hit on Bruins’ defensemen Torey Krug. After straightening out the Boston defensemen with a clean, hard check, Schenn was then engaged by Kevan Miller to fight. The two had a few spirited exchanges before Schenn toppled to the ice but moreover, this is the Brayden Schenn the Flyers need consistently.

The 24 year-old forward didn’t tally on the scoresheet tonight but he did leave his impression on the game elsewhere and that helped the team. As mentioned in previous blogs, Schenn’s tendency to disappear when he isn’t putting the puck in the net calls for concern but when he is engaged physically like he was tonight, positive things tend to happen.

The night, however, belonged to the Flyers top line of Voracek, Giroux and Simmonds as they exploded for 7 points in the win. Giroux and Voracek in particular showed off some impressive passing sequences that kick-started rushes for the Flyers as Simmonds provided solid board play in the trenches. The unit as a whole was able to move the puck efficiently and spent large chunks of their shifts in the Bruins zone as well.

If this can continue for the top line, in addition to the good stretch that Couturier, Schenn, and Raffl have strung together, the Flyers may have found themselves line combinations that they can feel comfortable with, no matter the opponent.

That’s a good place to be when you’re just two points out of the playoffs.