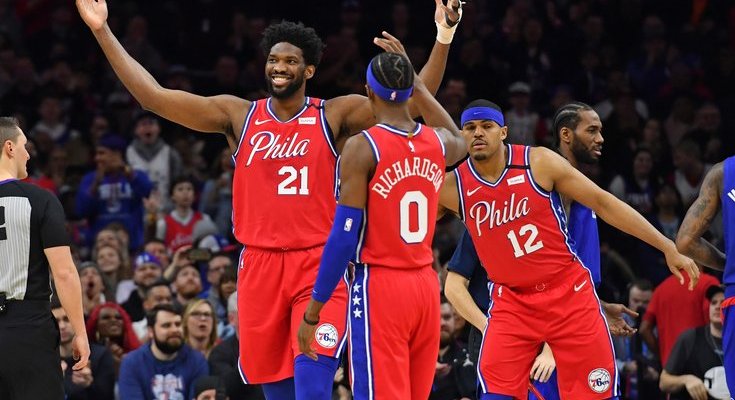 The 76ers defeated the LA Clippers tonight 110-103. The team was able to push their NBA best home record to 25-2 thanks to a handful of contributors.

Joel Embiid and the fan reaction was the significant story heading into the night. Although some bitchass sports sites like Bleacher Report tweeted that Embiid was booed by the Philly crowd, he wasn’t. Joel started the game off with an and-1 play, and though he didn’t hit the free throw, after he put the deuce in he pumped up the crowd and gave a huge smile. The Philadelphia crowd was loving it just as they loved Joel all night.

Embiid finished the game with 26 points and 9 rebounds in 28 minutes. He had one block in the game which was hugeeeeee because it came on Marcus Morris just moments after Joel and Morris got into a little shoving match for the second time this season.

Embiid posted new pictures on Instagram and Twitter once again tonight claiming that Philadelphia is his city, and it’s nice to see as a Sixers fan.

Ben Simmons was the best player on the floor tonight.

Simmons finished the game with a triple-double tallying 26 points|12 rebounds|10 assist in 43 minutes. Simmons was an animal tonight. The aggressiveness and passion that he played with tonight is what majority of Sixers fans want to see out of Simmons. We know the type of player that he can be, and we know it’ll be beneficial to the team, as well as his career if he was able to replicate that performance most nights.  Ben finished as a +24 on the +/- and defensively, he was even better. Simmons was able to draw multiple charging calls, he was able to hold Kawhi to a somewhat average night, even with 30 points. Leonard shot 12-23 and ended the night with a -10 on the +/-. Paul George was held to just 11 points on 3-15 shooting and a -7 on the +/-.

I heard Sixers reporter Jon Johnson on WIP earlier and he explained how Ben is starting to become more of a leader in the locker room. He’s starting to actually embrace the role and is becoming more comfortable day by day. We seen that on the court tonight. Again, not only was Simmons aggressive, he played with passion and seemed very vocal. You love to see it!

The Sixers’ Ben Simmons has recorded consecutive triple-doubles for the third time in his career. The only other player in team history to record back-to-back triple-doubles more than once is Wilt Chamberlain. pic.twitter.com/WPK8cHq4Ao

Tobias Harris was another Sixer who was very aggressive early and had himself a great game. He finished with 17 points, 12 boards, and 5 assists. He had the hot hand early on in the game and even yammed on this poor son of a bitch while he was at it

Harris may have had a hot hand early, but Sixer SG Josh Richardson certainly had the hot hand late. He finished the game with 21 points and 5 rebounds, yet had 17 of those points down the stretch in the 4th quarter. Richardson was able to help out and play some solid defense all night as well. The Sixers missed J-Rich when he was out, now their projected starting five can grow some more chemistry together after the all star break.

The one thing about the starting 5 tonight was Sixers power-forward Al Horford was not in it. Brett Brown decided to go with Furkan Korkmaz at the 3, and Tobias Harris at the 4. Horford played okay after going scoreless for the first time in his career the other night. He finished the night with 9 points, 6 rebounds, and 3 assist.

When Horford was asked by Brett Brown to come off the bench he said he “just accepted it.” He then went on to say, “Obviously, not the position that I saw myself in, but it was what was best for the team…he told me about his decision, I respected it, and we went from there.”

We will see after the all star break if Sixers coach Brett Brown continues to use that starting lineup and keep Horford as a key bench piece in his rotation.

The Sixers get some time off now with the all-star break. Their next game isn’t until next Thursday, 2/20/20, at 8pm vs Brooklyn. It’s another home game so lets see if the team comes out with the same energy they did tonight to push the home record to 26-2.