As many of you know, Rob Dunphy AKA Dunphy215 and the “Philly sports tattoo guy” raised about $28,000 for Diffuse Intrinsic Pontine Glioma which is a type of childhood cancer otherwise known as DIPG. It is a type of tumor that starts in the brain stem, the part of the brain just above the back of the neck and connected to the spine. The brain stem controls breathing, heart rate and the nerves and muscles that help us see, hear, walk, talk and eat.

When Dunphy first went viral, he and his tattoo artist Mike Nemo came up with the idea to raise money for charity and Nemo would finish all of Dunph’s tats for free.

Dunph chose Storm The Heavens Fund, a fund created by Mina Carroll and Mark Stendardo dedicated to finding a cure for DIPG, which has a 0% survival rate.

Storm The Heavens has an event every year by the name of “Bean’s Ball.” This event was made to raise awareness and fund desperately needed research in the fight against DIPG. The event is named after Mark and Mina’s beloved daughter Philomena “Bean” Stendardo, who was just 8 years old when she lost her battle to DIPG.

Rob Dunphy figured he’d “shoot his shot” and invite Phillies superstar Bryce Harper to join him at the event. The event took place last Friday night, and as much as Harper wanted to join Dunphy and attend the event, he’s been a little busy at Spring Training preparing for the season down in Clearwater.

(1/2) S/O to the legend @bryceharper3 himself. I shot my shot and invited him to @Stormtheheavenz Ball and due to Spring Training where he’s out hitting baseballs on highways he couldn’t make it. BUT being the Philly Legend he is he said he could send me a bat. pic.twitter.com/pDkNUw98Vz

(2/2) Mina and @mark_stendardo were able to RAISE money off his bat to help find a cure for this battle for kids against cancer! #WeMustDoBetter #StormTheHeavens

An autographed Bryce Harper game model bat should definitely get some high bids in a silent auction, especially to help in a fight against a childhood cancer that holds 0% survival rate.

Kudos to Dunphy and Bryce, I’m sure this won’t be the last time these two hook up for this cause…

If you’d like to donate or learn more about Storm The Heavens Fund you can click on the picture below. 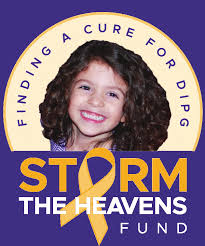